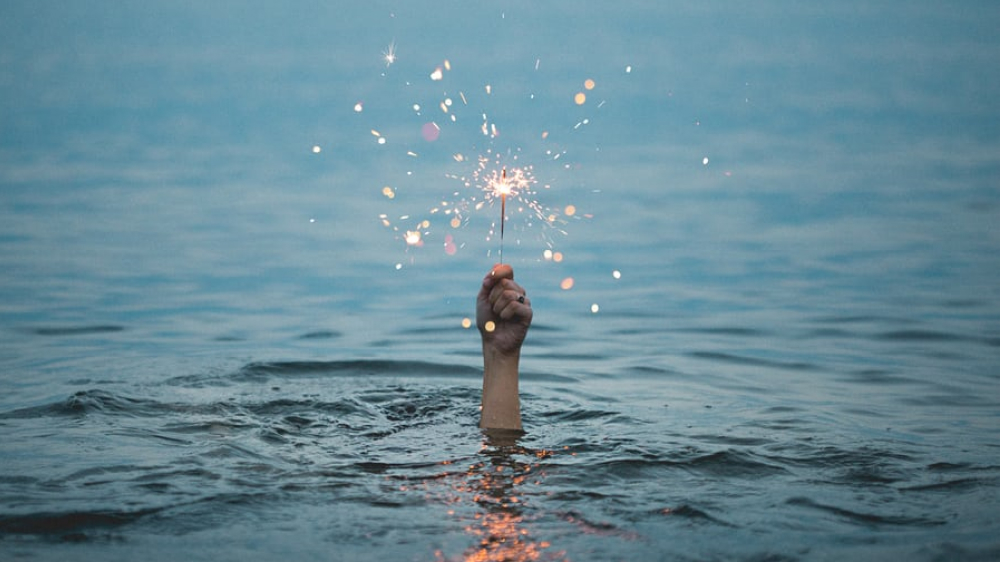 Near the end of Press Go, you related a conversation that you had with a colleague who asked, “If you knew that tomorrow would be your last day on this earth, what blessings would you count, and what hopes and wishes would still be unfulfilled?” I enjoyed your answer to the first part of his question, but I believe you evaded answering the second part. So, what hopes and wishes do you have that remain unfulfilled?

Now that I’ve finally written my book, only one unfulfilled childhood wish still remains. It may seem trivial to you. Don’t think less of me until I explain why learning to swim is so important to me.

No one on either side of my family could swim. It’s not just that they weren’t good swimmers—the Seibels and Shimkuses all sunk like rocks. My father, Skip, enlisted in the Navy in World War II even though he couldn’t swim a stroke. Boot camp after boot camp, the instructors would tell him what to do, toss him into the water, and watch as he sunk to the bottom. They could just as well be tossing him in the air and asking him to fly. There was a war going on, so the Navy was reluctant to reject any recruit, even one that could not swim. They gave him one final chance and sent him with eight other sinkers to the top swimming instructor in the Navy. Only Skip and one other sailor were unable to pass the test. As Dad tells it, “Our instructor had never encountered anyone that he couldn’t teach to swim, and he was not going to let the two of us ruin his perfect record. So, he asked us to enter the shallow side of the pool and said, ‘I’m going to have a smoke. When I return, I want to see you both at the deep end of the pool. And I don’t care how you get there.’” To the best of his knowledge, my Dad was one of only two sailors in World War II who never learned how to swim.

I took swimming lessons as a kid, but to no avail. Like my father, I wasn’t afraid of the water, and enjoyed the beach, canoeing, and even whitewater rafting. I suspect that a big part of my inability to swim may have been mental—not believing that I could be successful was preventing me from learning. After all, no one in my family could swim.

After enrolling at Penn State, I discovered that every student was required to pass a swimming test in order to graduate. I panicked. Neither math, nor science, nor engineering would prevent me from being the first person in my family to receive a college degree. But coming from a long line of non-swimmers just might sink me.

I deferred my swim test for as long as I could, finally registering in the winter term of my sophomore year for an 8:00 a.m. Tuesday-Thursday-Saturday class. I shared an off-campus apartment with three other students, and it was a long and cold two-mile walk to reach the natatorium. Tuesday started with a swimming test that would either exempt you or exile you to “Beginning Swimming.” I was surprised, but encouraged that so many other students failed the test along with me.

Thursday’s class was easy. It covered the theory and mechanics of swimming. I didn’t even get wet. Perhaps this was going to be easier than I thought. But as class ended, our instructor barked, “You all better be well rested for Saturday’s class. I’m going to work your damn tails off.”

Of course, I was nervous. The only thing that I could do was commit to a quiet Friday evening at my apartment, with no partying, and an early bedtime. As difficult as that was for a college sophomore, I turned my lights off and crawled into bed at 11:00 p.m. At 2:00 a.m., I wakened to a loud pounding on my door. A carload of friends had arrived from another college to surprise me. What could I do but party with them? They fell asleep at 7:00 a.m., as I headed to my swimming class. I prayed, “Please Sweet Jesus. Let today’s class just be a review of theory and mechanics.”

My prayers were not heard. Our instructor divided us into two groups, and I was assigned to Group One. “Group One jump in and swim to the other side of the pool,” he barked. I kicked hard off the side of the pool so that I made it about ten feet before sinking. I stood up choking and saw every other member of Group One sitting at the other end of the pool waiting for me. I thought to myself, “Those fuckers were all sandbagging when they took their test so that they could get an easy ‘A.’” I was the only person in Beginning Swimming that couldn’t swim.

After three more tries, I finally reached the other side. But as soon as I touched, the instructor ordered, “Group One back in!” He continued to do that, again and again, the moment I touched. I was out of breath and exhausted, spitting out water, and knew that he clearly was picking on me. After the fourth time, I lost my temper. That doesn’t happen very often, but it sure did that Saturday morning. I’m not clear on what happened next. I don’t quite remember. But my fellow students told me that I jumped out of the pool, took my trunks off, strode naked over to my instructor, and point-blank hit him in his chest with my sopping wet trunks. I do recall walking back into the locker room stark naked.

I said to myself, “If I thought that it was going to be very difficult to pass swimming before this morning, it’s going to be even harder now.” But I had two more classes that morning and decided not to worry about it until I returned to my apartment at lunch time.

Soon after I arrived, my visitors began to wake up. I told them what happened and asked for any ideas. Everyone agreed that I was done for—except for my friend Y.A. “I have an idea,” he said. “My roommate was flunking physics last semester. He went to the health center with a made-up story about not being able to sleep because he was having nightmares about physics. He said that it was impacting his health, so they let him drop the course.”

“Do you think that would work for me?” I asked.

That afternoon, I walked into Penn State’s Ritenour  Health Center. Thirty thousand students were enrolled that January, and it seemed like at least half of them were there with the flu. The waiting area was full, and a long line to the registration desk wound through the lobby all the way to the door.  Finally, it was my turn.

“Here with the flu?” the attending nurse assumed.

“No,” I said. I paused to take a deep breath so that I could continue with a straight face. “I’ve been having recurring nightmares about killing my swimming instructor. And they’re becoming more and more real. And I think that I may have attacked him this morning.”

She look startled but didn’t hesitate. “Follow me,” she said as she escorted me to a solitary seat isolated from everyone else. I felt like I was on the “Group W” bench that Arlo Guthrie sang about in “Alice’s Restaurant.” It wasn’t long before I was called to see the doctor. He was holding my file and had the nurse’s notes in front of him, and asked, “So, what brings you here today? The flu?”

I took him through the Seibels’ genealogy of sinkers, told him about my Dad’s experience in the Navy, and explained my anxiety at facing the likelihood that I wouldn’t graduate from Penn State because I couldn’t pass the swimming test. The doctor was furiously scribbling notes to keep up with my story, but stopped writing and looked up when I said, “I’ve been having recurring nightmares about killing my swimming instructor. And I’m afraid that they’re becoming more and more real. I think that I may have attacked him this morning.” The good doctor dropped his pen.

“What is his name?” he asked. The examining room was small, so I could hear both sides of the conversation when he phoned my instructor. “Damn right he attacked me,” I heard him say. “He hit me with his wet trunks and strode out stark naked. He’s a whack-job, and I don’t ever want to see him in my class again.”

The doctor looked at me, and I returned his stare with my most innocent smile. He scribbled something on his pad. I wondered if it was “whack-job.” And then he said, “I think that it’s best if we exempt you from the mandatory swimming test. I’vechecked to see what other phys ed classes are still available in that time slot. Would you mind enrolling in badminton instead?”

To the best of my knowledge, I was the first sinker to graduate from Penn State. My friends and I celebrated that night. I admit that it was a huge relief at the time. But swimming remains my longest-standing unfulfilled wish. Perhaps I still have time to achieve it. Grandma Moses started painting at 76, Nelsen Mandela was elected president of South Africa at 75, and Christopher Plummer didn’t win his Oscar until age 82. And if I do learn to swim, I’d like to return to Penn State’s Ernest B. McCoy Natatorium to retake my test. If I pass, I wonder how much I would have to donate to have the building renamed the William A. Seibel Natatorium.